Earlier this month, Minneapolis Federal Reserve Bank President Neel Kashkari and former Minnesota Supreme Court Justice Alan Page proposed amending our state’s constitution to make “quality public education” a “fundamental right.” As Justice Page explained at a recent event, the goal of the amendment is to raise the bar and hold the state accountable for ensuring all children get the education they deserve.

Some see this as a game-changer: By amending the state constitution, we can drive dramatic changes to improve academic outcomes. Meanwhile, vociferous opposition from Education Minnesota, the state teacher’s union, was swift. They fear the amendment would spell the end of public education as we know it—ushering in divestment in education, paving the way for private school vouchers, and undermining district schools.

The truth, of course, lies somewhere between—if the proposed amendment were to make it on the ballot and win the support of Minnesota voters, it would neither be a silver bullet solution nor would it lead to the demise of public schools.

What Changes Under the New Language?

The current constitutional language requires that Minnesota provide an education that is general, efficient, uniform, and funded by the Legislature. This vague guardrail for the quality of our public education system is a low bar and stays silent around how the state should allocate resources to improve student outcomes. In 1993, in Skeen v. State, the Minnesota Supreme Court concluded that the constitution’s “general and uniform” language requires that the education system meets the basic educational needs of all students. The Court also held that the constitution requires the state to provide enough funds to ensure that each student receives an adequate education.

More recently in Cruz-Guzman v. Minnesota, the state has built its case around this low bar of “adequacy:” essentially if the state is providing four classroom walls and a teacher, the bar is met. Is this really all that we want from our education system? One that meets only “basic educational needs” and provides nothing more than an “adequate” education?

I’m reminded of an ad campaign that features hopelessly obtuse and insincere professionals promising to do an “OK” job of car repair, tattooing, babysitting, tax filings, and even surgery. The tagline, of course, is that “just OK is not OK.”

The same should be true with educating our children. Our current constitution, which should be the beacon ensuring every child has access to a quality education, falls flat by making “just OK” sufficient. Parents, students, educators, taxpayers, and community members should expect more from our schools, and we should have a state constitution that reflects that.

The proposed language envisions an education system that’s more than just adequate and instead shifts the focus to quality. Not only that, it names education as a paramount duty of the state. It’s hard to reconcile fears about decreased investment in public schools with the plain language of the proposed amendment: 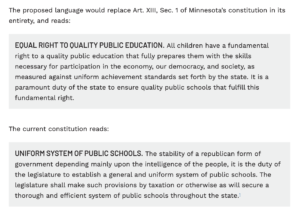 This proposal elevates big-picture questions about education to the state policy stage. We believe that the idea of strengthening the education clause in state’s constitution has merit and deserves debate. We appreciate that Page and Kashkari have invited discussion and would welcome suggestions to improve upon the language. At the same time, they have urged against watering down key provisions such as the “fundamental right to a quality public education,” and “measure[ment] against uniform achievement standards.”

Some of the criticism of the proposed amendment is valid. It would strip from our constitution the clear and plain language that the Legislature is solely responsible for resourcing a general system of public schools. But, would the removal of this language result in the Legislature no longer funding Minnesota schools? That’s highly unlikely, since high-quality education requires proper legislative funding.

The proposal also puts into question the relevance and need for a “uniform system of public schools,” which is an appropriate conversation to have since our students and families have increasingly diverse needs. Minnesota’s constitution was drafted over 160 years ago when basic access was critical; today our state should set a higher bar to ensure all Minnesotans can meaningfully participate in our workforce, democracy, and communities.

Repealing current sections of the constitution could have policy and political implications that— if the Legislature is serious about tackling this new constitutional framework to improve our public education systems—will need to be ironed out among constitutional experts and at the Capitol. Wherever we might land on the repeal or modification of current constitutional language, we must keep students’ needs at the center.

As Minnesota State Representative Rena Moran said about the amendment: “No one dreams of providing their children with an ‘adequate’ education. Whether you live in Frogtown or on the Iron Range, all parents aspire for more than ‘adequate’ for their children.”

Attorney General Keith Ellison agreed that our state can and should aspire to do better than what’s in the current constitution. At the Federal Reserve’s event launching the concept, he said that the state currently can defend our education system simply by saying, “it might not be great … but it’s adequate.” We can successfully defend our schools, he went on, “if we convince a court that our system is adequate and uniform enough … even though the [outcomes for students] are so bad.”

In the end, to ensure Minnesota students are ready for college and career in an increasingly competitive and global workplace, we need to be more than “just OK.” At both the Legislature and in the community, we need to be more ambitious for our kids. And in making sure we have all hands-on deck in providing a high-quality public education, we need every lever possible, including the courts, to drive change for students who have been underserved for too long.

EdAllies’ 2020 Priorities at the Capitol